Congress shall not appropriate monies greater than 20 percent of GDP without a two-thirds vote of both Houses.

Congress shall have no power to appropriate monies for any year for which a budget has been established by Congress of a sum greater than one-fifth of the Gross Domestic Product of the United States for the prior year as determined by Congress unless the appropriation is approved by a two-thirds vote of both Houses.

This amendment is as close as we have come to a balance-the-budget amendment. The trouble with a requirement that the budget be balanced is that it denies flexibility to Congress to deal with unforeseeable circumstances that require occasional borrowing. In fact, it was the availability of credit that permitted Henry Ford to grow Ford Motor Company into the business that it is today. It would be unfair to the American people to deny Congress the ability to use credit vehicles in appropriate cases.

However, Congress must exercise discipline regarding the money it borrows. We have provided this discipline by specifying a targeted guideline of 20 percent of Gross Domestic Product (GDP) with the power of Congress to override that guideline by a two thirds vote of both Houses. We believe such limitation, in conjunction with Congress’s obligation to make declarations with respect to its laws, will give Congress flexibility to borrow money if a super-majority consensus believes that to be in the best interests of the country.

The federal government spending as a percentage of GDP over the past fifty years is shown in the following chart: 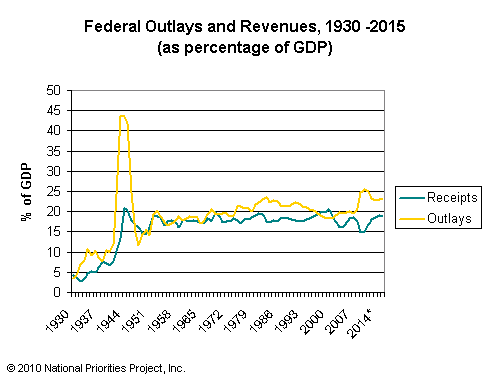